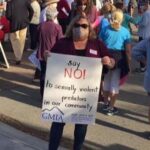 Whenever there’s a news report that a sexually violent predator is proposed to be placed in a community, the neighbors are always outraged – even though a Superior Court judge has heard the evidence and determined the person is safe to be conditionally released. Then why are the neighbors so upset?

The assistance of a county program at the start would have prevented the situation now occurring in San Diego County with the proposed placement of sexually violent predators Douglas Badger and Merle Wakefield in a house in the Mt. Helix area of East County. At a hearing before Superior Court Judge Theodore Weathers to determine Badger’s placement, Deputy District Attorney Martin Doyle said his office was opposing the placement of Badger, which had been recommended by Liberty Healthcare, the company charged by the state with finding a placement and supervising him.

“We do not feel this is a particularly good placement for Mr. Badger, either for his treatment, but more importantly, for community safety,” Doyle said. He also stated the placement is inappropriate because the house is too close to other nearby homes with families and children.

At another hearing, Superior Court Judge Albert T. Harutunian III also said that the house was not appropriate to place sexually violent predator Wakefield because the neighborhood is too dense, and the house is too close to other homes with children. “It is not a safe placement for the community,” Harutunian said.

With 89 children near the proposed placement, the affected families are rightfully concerned about safety. If San Diego County been involved in the placement earlier as required by the state, a more appropriate location could have been found for these sexually violent predators, perhaps in a trailer on state property.

We need to protect our children. However, the County left the entire process to a private corporation, Liberty Healthcare, which has the main goal of finding a quick fix and getting paid. The County should be required to do its job.

If the County had been involved as required, it could have prevented the selection of locations that violate state law. The law states that in recommending placement, consideration must be taken into account for the “age and profile of the ​victim or victims in the sexually violent offenses committed by the persons subject to placement.” Sexually violent predator victims range from minor children to adults, with charges of rape and with violence. Therefore, a location in a family-friendly neighborhood would never be considered, or a house with poor visibility or building code violations.

On May 4, the San Diego County Board of Supervisors unanimously voted to investigate the problems with notification and placement of sexually violent predators and determine the proper procedure needed by the County.

It is time the County does its job. In the meantime, the placements of any sexually violent predators should be delayed until the County of San Diego is ready to comply with state law.

Hedberg is the President of the Grossmont-Mt. Helix Improvement Association (GMIA.net) and a Board Director of the Helix Water District.