Well, no wonder they failed. In political terms, 2013 is a lifetime away. Obama will probably not be President by then. There is no immediate impact other than to credit ratings. It gives the new President and a new Congress time to deal with the problem. It even gives the current President and Congress time to deal with the problem. If pork barrel spending in their districts was going to end next month, maybe some compromise would have been reached. For all of the press and attention given to the so called Supercommittee, the actual immediate impact will be nil.

Billy House of The National Journal got the important fact correct.

But the nation’s debt crisis will continue – with the deficit now at about $15 trillion. It also is likely no coincidence that the committee waited until the financial markets closed for the day to make the announcement. The Dow Jones industrial average had already tumbled by more than 300 points earlier in the day partly in anticipation of the acknowledgement of failure.

In case you thought that the Supercommittee meeting its goal would be a significant victory for deficit reduction, consider this.

By law, 18 percent of the automatic savings are assumed to come from interest costs the government would save from reducing the debt. If the Super Committee fails completely, out of the $1.2 trillion in automatic savings, $216 billion would be assumed interest savings.

That would leave $984 billion in automatic spending cuts over 10 years. That works out to around $55 billion annually each from defense and domestic programs though a CBO analysis shows that comes out to 10 percent of the Pentagon budget in 2013 alone, a huge hit.

$55 billion annually? Really? The national debt is increasing at a pace of close to $2 trillion per year, with an official budget deficit of $1.5 trillion per year. (I never figured out that discrepancy, the official deficit is always less than the annual increase in debt, go figure.) To put this into household terms, its as if you were borrowing close to $200,000 against your house, year after year, and an adviser came up with bold plan to reduce your expenditures by $5,500 $11,000* per year. Not even a really credible first step. What a game politicians, with the connivance of the press, are playing on us all.

Only serious decreases in spending and increased revenue from a recovering economy are going to fix this. So every job killing, economy destroying decision by this administration starting with Obmacare, the Boeing plant in SC, ending most recently with killing the Keystone XL pipeline, has hurtled the country towards increased and unsustainable debt.

The Democrats were their usual retarded selves in this deal, but I thought the Republicans could have smarter about offering some revenue increases that would accrue to eliminating loopholes/deductions as a step towards comprehensive tax reform, earlier in the process. It appears that Sen. Pat Toomey (R-PA) offered such a plan at the last minute, but it didn’t raise enough revenue to satisfy the Democrats.

Toomey’s plan would raise $300 billion in new tax revenues while overhauling the federal tax code. Republican officials say it would drop the top tax rate on personal income to 28 percent from the current 35 percent. It would reduce or eliminate some well-known itemized deductions and reduce the corporate tax rate.

If Republicans had offered the plan earlier, and got agreement to score it with dynamic, not static analysis, it would raise far more revenue than the $300 billion advertised, and we might have been much closer to a deal. The Republicans are right to keep trying to push down marginal rates, but they should be coupled to eliminating deductions to move towards more of a flat tax, because this will also be a reform that reduces corporate influence on Capitol Hill.

Just in case there was any doubt about my discussion on the fact that spending and revenue are both problems, but spending is more of the problem, I offer this chart from the Heritage Foundation. 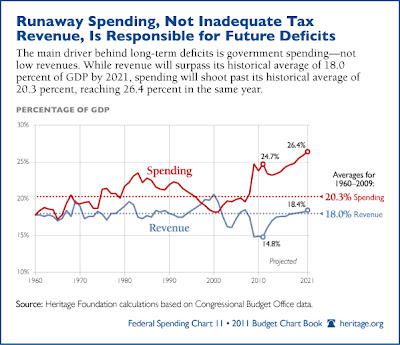 *Post publication correction. I failed to account for the fact that there are two categories of spending reduction, so the total per year needed to be doubled. However, $11K per year against a household deficit of $200K per year is still pathetic.