Dave Maass, at CityBeat, gets in on the local watchdog action with his report of how County Supervisor Ron Roberts and Carlsbad City Councilwoman Ann Kulchin treat the San Diego Service Authority for Freeway Emergencies (SAFE) like their own personal slush fund. (My words, not Dave’s). The fund was established in the 1990s to build out and maintain the system of freeway call boxes through a $1 vehicle tax. Of course, since the call box system is fully built and maintenance is low, the excess monies should be returned to the taxpayers. Sure it is, not. Here are the money paragraphs, literally.

Kulchin and Roberts control the purse strings as a two-vote majority on a three-person budget committee—a group treated to homemade lasagna at each meeting by Eddie Castoria [pictured above], SD SAFE’s privately contracted executive director.

Castoria used to manage the call-box program as a county employee until SD SAFE privatized the system. Castoria formed his own company, TeleTran Tek, and won the contract. SD SAFE paid his company $405,000 in 2010 and plans to increase his rate 2 percent each year until it reaches $478,000 in 2017. In addition, Castoria also picks up hundreds of thousands of dollars in consulting contracts from other county SAFEs.

The lasagna is really my favorite part of the whole article. 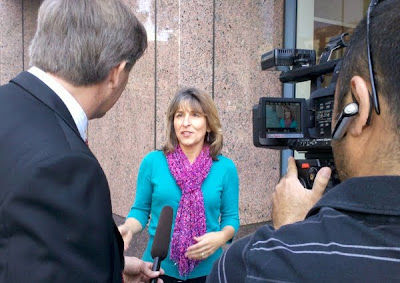 To her credit, District 6 Council member, Lorie Zapf has gone public with her objections to the waste of your car tax dollars.

Meanwhile, in an update from Sunday’s U-T Watchdog recap, the county pension system was embarrassed into reviewing its investment in Mississippi timber venture.

The county pension system will revisit a $50 million investment in a Mississippi timber venture because board members were not told about two business partnerships their own fund adviser has with the wood-harvesting company.

Brian White (pictured below) had initially stated that no review was needed, but reversed field shortly after the U-T Watchdog published their initial article.

Cross posted to The Liberator Today. Don’t forget to take my poll on the Republican position on putting Brown’s tax proposal on the ballot.