He hit on all the topics you’d expect – the war on drugs, the debt and deficit, central planning, the TSA, big government destroying the economy, the Dirty Fed, global imperialism, etc. And of course the solution to all of this: restore the Constitution,

Here is some video from the event.

The U-T managed to get out a decent report of the event as well. Focusing on the local angle where a UCSD student was left in a DEA holding cell for five days without food or water.

“We know about the case of Daniel, one of the students here, of being arrested and thrown in a prison and forgotten — for five days — ending up in an intensive-care unit,” Paul said to loud boos. “And then it’s done in the name of being a compassionate conservative. That’s not compassion at all.”

Even though I am supporting Romney for President, I am much more in tune with the proposed policies of Ron Paul. He is a great American who has been fighting for liberty for quite a long time.

As promised, Left Coast Rebel also has a report on Dr. Paul’s visit. 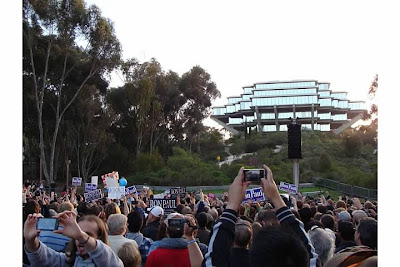