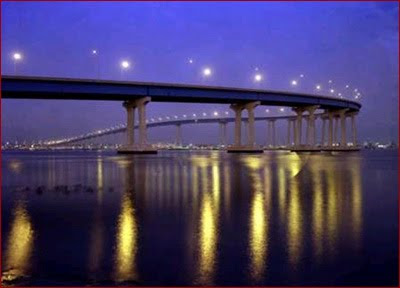 Thor’s assistant points out in the comments that the initial effort at renaming the bridge was announced here on San Diego Rostra by Rostra blogger Vince Vasquez. Seemed only appropriate to give him credit in the body of the article. /update.

“I started this page because I don’t want the San Diego-Coronado Bay Bridge renamed the ‘Ronald Reagan Memorial Bridge,’ he writes on his Facebook page. “I know there are many San Diegans who agree with me that this effort by a very partisan right wing individual to politicize a non-political local landmark is unnecessary. Please help me protect the name of the bridge ….”
. . .
Klowden does not see this as a liberal-conservative issue. “This city has a tradition of not having traditions” he said. “When it comes to preservation, I’m fairly conservative.”

So what do you think? At first, I was pretty miffed and it seemed like a typical leftist reaction to the greatness of Reagan. But I also thought, in 1987, San Diego voters voted to restore Market Street to its original name after a short spell as Martin Luther King Way. I’m also still miffed about the Murph being renamed after a local firm beginning with the letter Q. Is this issue so different?

Contrariwise, its only a bridge, not a piece of San Diego history, the way Market Street was. And supposedly serious coin, to the tune of $18 million, changed hands to get the name of Jack Murphy Stadium changed.

What do you think? Please vote in my poll at The Liberator Today.