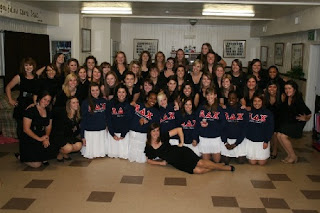 In yesterday’s news, 10news is reporting that the 9th Circuit has ruled against San Diego State sorority Alpha Delta Chi, the only Christian sorority on campus. The crux of the issue is whether an officially recognized campus group, which can receive funding if recognized, may restrict membership on the basis of religion. Alpha Delta Chi requires a pledge of faith akin to the Nicene Creed for membership. Given that the taxpayer dollars are used to support officially recognized groups, I have some sympathy for the policy of the California State University system, (from the 9th circuit ruling):

No campus shall recognize any fraternity, sorority, living group, honor society, or other student organization which discriminates on the basis of race, reli- gion, national origin, ethnicity, color, age, gender, marital status, citizenship, sexual orientation, or disability. The prohibition on membership policies that discriminate on the basis of gender does not apply to social fraternities or sororities or to other university living groups.

However, when we review the details of the case, we find that SDSU isn’t quite so squeaky clean as they would have us believe. The 9th circuit remanded the case to the trial court because, hey, what do you know, maybe SDSU doesn’t apply the so called anti-discrimination policy in a non-discriminatory fashion.

In this case, Plaintiffs also offer evidence that San Diego State has granted official recognition to some religious student groups even though those groups, like Plaintiffs, restrict membership or eligibility to hold office based on religious belief. For example, the Catholic Newman Center’s application for official recognition by San Diego State provides that its officers must be “members, in good standing, with the Catholic Church.” Further, some non-religious but officially recognized groups appear to discriminate on prohibited grounds, in contravention of the policy. For instance, the African Student Drama Association’s constitution limits its leadership positions to students from Africa.

Now the University is going to have to defend whether or not they applied the policy in an even handed manner. I look forward to seeing their response. I imagine that they will deny status for the aforementioned groups and look tough for a while until this blows over, then resume discrimination against Christian groups only. H/T Volokh.