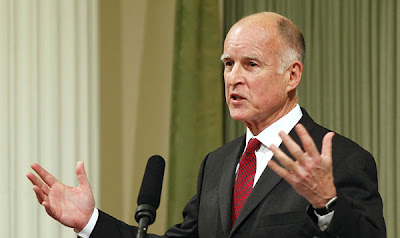 Despite calling his address the State of the State, Jerry Brown’s speech was really first, foremost and only about the looming budget deficit. It is unlikely to be papered over one more time, but who knows politicians are such good liars. I missed the speech, but am reading from the transcript.

The governor makes some good points.

My plan to rebuild California requires a vote of the people, and frankly I believe it would be irresponsible for us to exclude the people from this process. They have a right to vote on this plan. This state belongs to all of us, not just those of us in this chamber. Given the unique nature of the crisis and the serious impact our decisions will have on millions of Californians, the voters deserve to be heard.
. . .

But I also understand that redevelopment funds come directly from local property taxes that would otherwise pay for schools and core city and county services such as police and fire protection and care for the most vulnerable people in our society.
. . .

We have the inventors, the dreamers, the entrepreneurs, the venture capitalists and a vast array of physical, intellectual and political assets. We have been called the great exception because for generations Californians have defied the odds and the conventional wisdom and prospered in totally unexpected ways. People keep coming here because of the dream that is still California, and once here, their determination and boundless energy feeds that dream and makes it grow.

I knew it was unlikely that the budget deficit would be closed with spending cuts alone, even though they should be much higher priority than new taxes, or even extensions of temporary taxes now in place. But the governor mentions pensions exactly once in the speech, at the end, with a vague promise of fairness. The pensions are a big cause of the current mess; his failure to address pension reform is irresponsible. Unless this issue is addressed, any plan will not be a long term success. From Adam Summers writing in the OC Register last December:

California’s public pension and retiree health and dental care spending has quintupled since fiscal year 1998-99, increasing to $5 billion in 2009. And retirement spending is expected to triple again – to $15 billion – within a decade. The coming wave of baby boomer retirements and steadily increasing health care costs ensure that this burden will continue to grow rapidly. California will be spending more and more for state retirees’ benefits, leaving less and less for other budget items such as public safety, education, and transportation.

The state budget passed in October takes state pension benefits back to 1999 levels – for future/new state employees – and the Schwarzenegger administration estimates the tweak will save up to $100 billion over time. That’s a minor fix at best.

The state has tried this before. In 1991, California created a second tier of lower benefits in an effort to stem rising public pension costs. Less than a decade later, the Legislature passed, with virtually no opposition, the infamous Senate Bill 400, which not only massively increased state employees’ pension benefits but also made those increases retroactive. It would simply be too easy for legislators, with the support and pressure of government workers’ unions, to do it again.

The Republicans are right to demand that the Governor not hold a special election on extending the current, temporary, tax increases unless he is willing to put forth serious pension reform. A crisis of this magnitude shouldn’t go to waste. I know that sounds facetious, but a failure to address a crisis’ root causes while it is in the forefront in the minds of the public, is a failure of leadership.