As I feared, the initial reaction to the specific issue of restricting collective bargaining for public employees is not favorable, according to Gallup, with 61% opposed. This, despite an earlier Rasmussen poll that shows support for Governor Walker’s overall approach. HotAir points out that Gallup has not released the details of this poll, so it is hard to analyze the data. However, other data from the poll also seems discouraging: 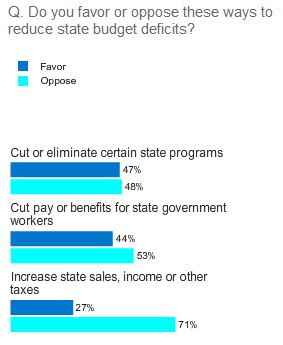 This data actually causes me to question the veracity of the polling data. If one believes the results, then voters are saying that they don’t support any method of reducing deficits. My intuition is that the voters are in fact, more engaged. In fact, it wouldn’t surprise me if this was a poll of the general population, not of likely voters. Agree with HotAir that the best course would be to press ahead, as the Governor was elected on campaign promises to tackle the deficit and his previous record as County Executive in Milwaukee made his approach no surprise to voters.

Meanwhile, the Southern California Tax Revolt Coalition based here in San Diego, will be holding a presser to express support for the Wisconsin Republican party approach to its deficits. To be fair, San Diego Tax Fighters is the lead group for this event. Details:

I think I capture the sentiment of the local Tea Party that we should oppose any attempts by Governor Jerry Brown to extend current tax increases or add new ones until he tackles pensions of the state employees. His failure to put the pension issue on the table is a recipe for disaster and prevents sustainable budget reform. This is why Scott Walker’s approach has much to be emulated, pushing unions to contribute more towards their own pensions and health care while taxpayers are suffering is only fair. Funny how the left only talks about fairness when it benefits the unions and recipients of government largess.