By now most of you have seen the video and heard the story of the armed couple defending their home and themselves from a mob of violent “protesters”. I say violent as my definition of “peaceful protesters” doesn’t include destroying an iron gate and storming onto private property. It also doesn’t include refusing to leave when asked or screaming threats and obscenities at the property owners.

I’m not going to defend their gun handling skills or probable justification, the Fudds and FB warriors have covered those subjects extensively online. What I will address is the question of why they were even placed in this situation. What is happening to our country?

Over the past several weeks we’ve seen violent mobs attacking people, destroying property, looting, and setting fires. This behavior is described by the media as mostly peaceful protest. The stated purpose of the protests seems disconnected from the behavior. We’ve seen this across the country.

What we have not seen is responsible reaction from the government. One of the responsibilities of the government is to ensure a relatively safe environment for its citizens. When criminals attack innocent people, when they burn and loot property, the government has an obligation to step in and stop that behavior. Our local governments, for the most part have not. Politicians have prevented police from intervening.

If government refuses to perform one of its core functions, citizens have no choice other than to do it themselves. This incompetent or cowardly (you choose) behavior by government officials creates situations like the one with the armed couple.

Citizens are being forced into these situations around the country. 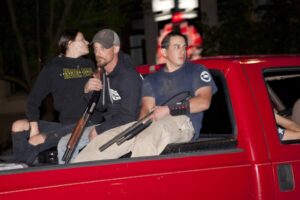 In Coeur d’Alene, Idaho, armed citizens responded to word that rioters were coming to their town. Protests occurred but remained peaceful likely influenced by the presence of armed citizens.

I’d like to say that so far no shots have been fired by legally armed citizens and that it’s only a matter of time before a confrontation ends in bloodshed. I’d be wrong since it’s already happened in Albuquerque. But it will get worse and when it does you can be sure that formerly timid government officials will aggressively blame and prosecute the armed citizens. The citizens will be called vigilantes and white nationalists by a corrupt media with calls for more gun control and confiscation.

Why is this happening. The current environment is a product of the people we elect to government. We have a mostly inept, and to a degree, corrupt government. When a largely apathetic and disengaged public elects people who consistently make bad decisions, this is the result. This is our creation.

The alleged reason for the protests is the belief that police across the country are oppressive, brutal, and racist and the police departments need to be reformed or dismantled. Let’s assume, contrary to an enormous amount of data that says otherwise, that this is true. The problem is seen as worse in our major cities. These cities also account for most of the violent crime in the country. These cities have been under the control of a single political party for decades. Maybe this is the problem.

California is one of the most poorly governed states in America. California has been mostly under the control of a single political party for decades. If we have a problem it’s because of the people that we elect to government office. If this is true, we also have a solution. There is an election in November.

So where does it end? It ends where the people say it ends. This is completely under our control. Gun owners have always understood that each of us is our own first responder. No one is coming to save you, something our government has recently been demonstrating. As self-defenders we know we win every fight we avoid. Let’s not let an incompetent government force us to fight. Let’s vote in a competent government and avoid the fight. Let’s win.