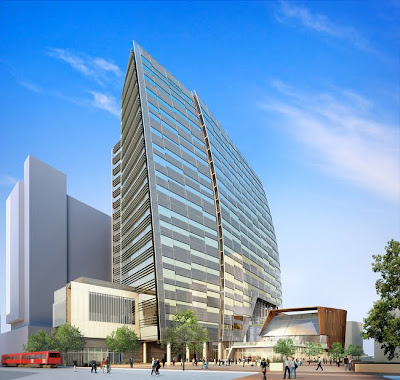 In a previous post on the folly of building a new City Hall, sdrostra.com commenter Phil Rath called me out on the issue of the return on investment of the new building. He linked to a Financial Analysis by the Center City Development Corporation, Implementing Downtown’s Redevelopment on Behalf of the City of San Diego [their tag line] and chides for me not reading it before commenting on the advisability of building a new civic center. Fair enough. Frankly, I was not aware that such a document existed. Mayor Sanders did not refer to this study when he complained that the public was unaware of the benefits of the new building. But thanks for sharp readers like Phil, who knew more or dug deeper into the issue and pointed out relevant material of which the author was unaware.

However, after briefly perusing the supporting documents, I stand by my original assertion that the new City Hall should not be built even though the documentation in the financial analysis purports to support that conclusion. First, and most importantly, the time frame for which the cost of operations is analyzed is 50 years. Under this scenario, building a new structure is the most economical option. In my view, 50 years is too long a period because too much can change in that time frame. 50 years ago was 1961, think about how much has changed since then. The internet wasn’t even an idea then, for example. The City Hall development proposes to house 3,000 city employees. I would hope that we could find ways to significantly shrink that work force over the next ten years, much less the next 50, so planning an edifice that leaves the size of government the same merely perpetuates our current problems.

The study also admits that over a 15 year capital planning period, the cost of maintaining the current facilities are less:

In the first 15 years, scenario 5, which proposes no renovation and has the City absorbing latent risk of current facilities, is the lowest cost alternative to the City at approximately $381 million.

Now all of this assumes that the supporting documentation is adequately written. Since I am by nature a skeptic, the first document I started reading was the peer review of the financial analysis written by independent auditors, in this case Ernst & Young. Here are some objections they made to the analysis. Here are some relevant quotes from that review:

Ernst & Young believes that certain assumptions utilized by JLL are not supported by current market evidence or are not documented in the JLL Reports. Some of the assumptions have changed over the past nine months due to declining market conditions. It should also be noted that EY found market support for many of JLL’s assumptions.

EY identified certain JLL cash flow assumptions which were not supported by current market evidence or were not documented in the JLL report.

Office rental rates have declined since the JLL field work was completed in early 2008. We believe their growth rates over the near term are too aggressive.

EY is Ernst & Young. JLL is Jones Lang LaSalle, the company that prepared the analysis.

Bottom line for me is that the financial analysis is not adequate for such a large capital outlay. Further, the city incurs significant risk when it owns its own buildings; a closer look at long term lease options seems more appropriate. The 0ther advantage of leasing office space is that it will continue to push efficiencies in the city government. Every reduction in the number of employees will result in decreased office costs. Encouraging more telecommuting and other space saving measures will result from having to pay for every square foot of office space consumed. It seems that a decision to delay building a new City Hall is the wisest course, given the insufficient case for a $294 million capital outlay.

I also question why the city isn’t pursuing a public-private venture, where by a private firm builds the new city hall, and the city proposes to lease it on a fixed schedule of increases tied to the rate of inflation, with the option of reducing the amount of space leased, which could be recycled to the private sector. Such an arrangement would offload the risk, and frankly cause the private firm to keep construction costs under control. Further, the city would not have to make the capital outlays that we lack the funding for anyway.