Update below the fold.

Temple of Mut has a great round up on the Occupy (insert your city here) events yesterday. Fellow SLOBs W.C. Varones and Left Coast Rebel both attended the San Diego event yesterday. W.C. has great video and LCR has revealing pictures. They are worth a review, because this movement is complex and even self-contradictory at times; see Thor’s Assistant’s comments on a related post, where their demands are listed. 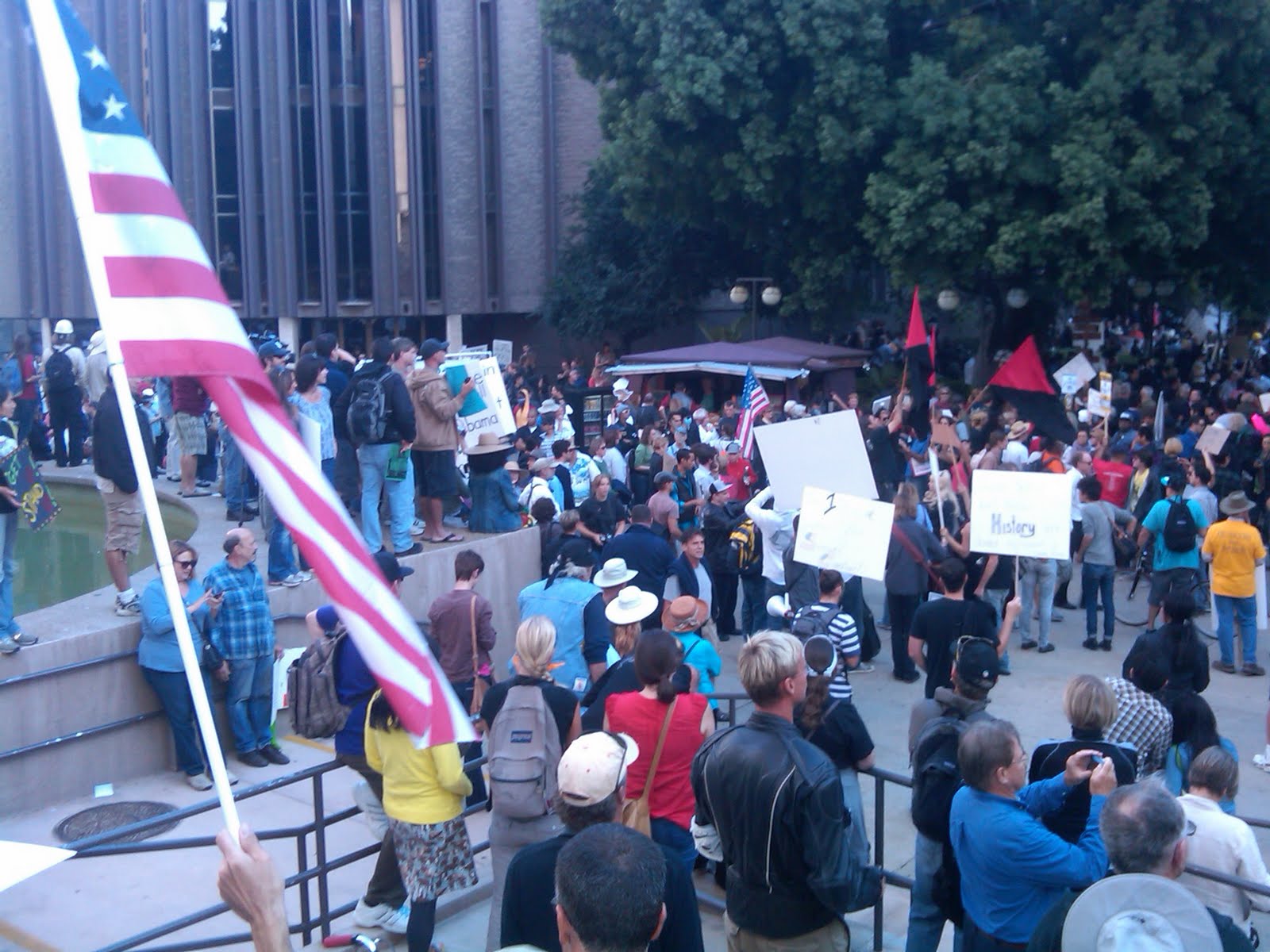 What are the red and black flags in the background? Glad to see the U.S. flag. 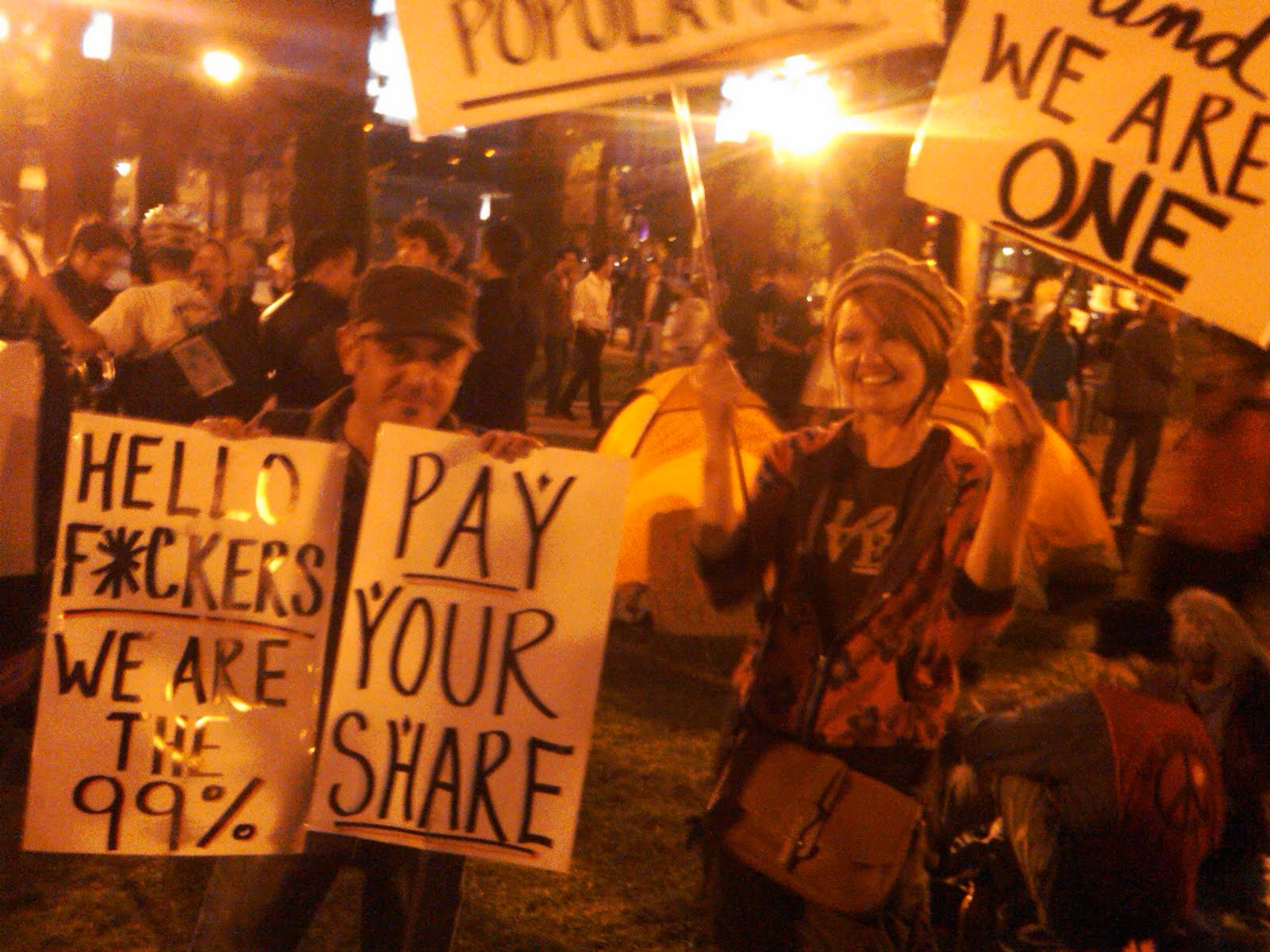 I am sympathetic to many of the complaints that motivate the Occupy Wall Street. Indeed, bailing out Wall Street and the banks with federal money was the initial event that inspired the tea party movement’s beginnings in 2009. Unfortunately, OWS appears to be getting hijacked by the usual suspects on the left, the socialists, communists, labor unions and the Green party. This results in fundamental disagreement with those in the tea party on the means by which to end the injustice of government support for privileged corporations. When OWS protesters start talking about confiscation of wealth and trampling property rights, it reminds me of the horrors of the Russian revolution. However, the outrage that all citizens feel with a political class that looks first to the interests of itself, then of its large contributors is poignant and a basis for common ground.

Here is an agenda that we might all agree upon, because it attacks the root causes that led to both movements.

That’s my short list, I hope those on the left can find some agreement.

I was alerted to a blog post by left of center, peak oil and “new urbanism” activist James Howard Kunstler, in the comments section of W.C.’s post. I am quoting one paragraph, because it shows that we can perhaps come to agreement with the left on some key issues.

For instance, what is Attorney General Eric Holder’s program for prosecuting CDO swindles, the MERS racket, the bonus creamings of TBTF bank executives, the siphoning of money from the Federal Reserve to foreign banks, the misconduct at Fannie Mae and Freddie Mac, the willful negligence of the SEC, and countless other villainies? What is Barack Obama’s program for restoring the rule of law in American financial affairs? (Generally, the rule of law requires the enforcement of laws, no?)

In case you can’t follow the acronyms he uses.

Instead of presenting the evidence to the Bankruptcy Court, MERS attempted to withdraw the Motion from the Bankruptcy Court’s consideration, citing the failure of a MERS Certifying Officer to demonstrate that a member was in physical possession of the promissory note at the time themotion was filed. The only evidence provided by MERS was a declaration that MERS had been identified as a beneficiary in the deed of trust and that it had been named nominee for the originallender. Since MERS provided no evidence that it was the agent or nominee for the current owner of the beneficial interest in the note, it has failed to meet its burden of establishing that it is a real partyin interest with standing. Accordingly, the order of the Bankruptcy Court must be affirmed.

TBTF = Too Big To Fail. The doctrine that we can’t allow some banks to fail or it will crash the whole economy.