I went to the Stand Up for Religious Freedom Rally last Friday in downtown San Diego. I was struck by how impassioned both the speakers and participants were. The President’s policies are uniting people of faith against him. The speakers all spoke of the importance of freedom and conscience to the proper functioning of government. They spoke of the continued assault on religious liberty. They spoke of the laughable accounting shell game of the administration: “Religious associations don’t have to pay for birth control, only their insurers will be required to provide that.” My personal estimate was that about 700 people turned up. We got honks of support throughout the rally.

Temple of Mut to has more complete coverage of the event. The best quote came from San Diego Bishop Cirilo Flores:

“Religious freedom is not a gift from politicians: It is a gift from God,” said Bishop Flores. “Today’s debate is not about the access to contraceptives…it is about the federal government forcing the Church to act against its teachings”. 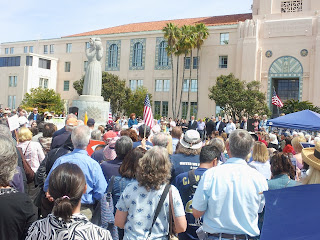 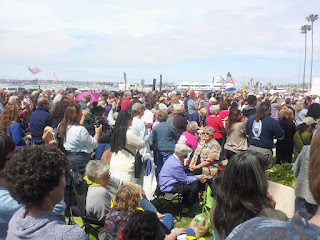