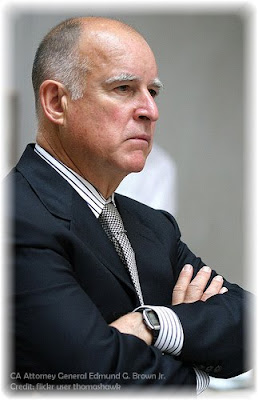 Math is winning, what a surprise. (This is a recurring theme at The Scratching Post.) Today’s U-T headline about the California budget dilemma is a case in point:

Democrats Confronted with the Limits of Power

In last November’s election, voters removed the requirement for a two-thirds majority to pass California’s budget. Democrats control both legislative houses and the governor’s mansion, so their job should be easy, right? Just pass the budget for crying out loud. But wait: Democrats can pass a budget without Republican support. But they cannot pass tax increases.

And the Democrats don’t want to use their newfound clout to push through a budget that gets by only on the revenue projected for the coming fiscal year, especially after the expiration of $11 billion in temporary tax increases.

But shouldn’t they be able to close the budget gap without tax increases as has been done in other states? Not if you lack the will to confront the unions.

But Brown and his allies have come under pressure from interest groups, especially the public employee unions, to oppose any spending limits or changes to the pension system. This has led to a recurrence of the same kind of partisan frustration that has marked past budget stalemates.

This is why I want the Republicans to prevent any ballot measure for tax increases to even come to a vote, Governor Brown refuses to deal with the main cause of our budget deficit, union pension promises. Don’t believe me? Read Adam Summers’ excellent summary at Reason. A snippet:

Without getting employees to contribute more to their retirement and medical plans and getting retirees to contribute to their medical, this will bankrupt the state no matter what cuts and tax increases are imposed. Unless Jerry Brown deals with the union pension mess, our state is doomed. The situation is little changed from the Schwarzenegger administration:

We should be contacting our Republican legislators to demand that they keep tax increases off the ballot until the unions negotiate on pension and medical care reform.