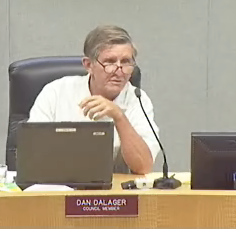 The Blog starts out with a Dalager quote:
“We’re talking about public resources,” Dalager said. “Are we going to have a system of law, or are we going to have little local tribes that decide what everybody can do?”
The blog then states: Dan is the guy who condones subversion of the law, backroom deals, and enjoys doing favors at city hall for his bros. Dan has endorsed the idea of commanding his sheriffs to not enforce laws that he personally doesn’t like. He has told friends of mine how to violate building codes and not get caught. General plan laws and municipal code laws don’t apply to Danny’s tribe of supporters. Public records laws and open government laws are something for him to literally laugh about.
But the Blog writer fails to substantiate ANY of these very serious accusations or name names or instances of such wrongdoing!  Subversion of the law? “Backroom deals”? Special treatment for supporters? Really? Got proof?  If not, is that actionable? Maybe… I guess we’ll see.
The Blog next states:
Recommendation for Dan Instead of doing personal favors for your bros, correct/set up city policies to the benefit of everyone. (again, unsubstantiated accusations)
Then it states: Dan has done favors for my friends when they ran into issues at city hall (name names, please). Instead of fixing the structural problem so the rest of us wouldn’t have to deal with the same crap, Dan provides personal favors. Expectations come with the favors. (No explanation of the quid pro quo inferred here, but quid pro quo is a no no, again, name names, please.)
Since I am a member of this blogpen myself, I respect that there is a certain amount of “freedom of the press” and first amendment freedom of speech that we as Americans enjoy, especially on the internet.  But this type of attack may cross the line by accusing a sitting City Councilman  of very specific, seemingly criminal wrongdoing.
Hell it slimes a guy who by all other acccounts is a very honorable public servant.
Should this type of nonsense be “shined on” or should legal action be taken to address the sliming of good public servants?
Encinitas’ Maggie Houlihan successfully sued a neighbor who posted signs saying something to the effect of  “Houlihan is a whore”.
Is this blog stuff different because Dan is not a woman and the reference to wrongdoing is not potentially of a “prurient” nature?
Solana Beach City Councilman, Joe Kellejian, successfully sued a guy for slander a few years back as well…
Just how far does the right to “slime” a “public” local official go?
I look forward to your informative posts!
(reference: http://www.theleucadiablog.com/2009/11/holy-moly_07.html)