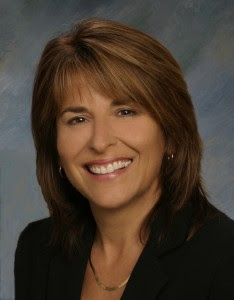 Last Friday, I received an email in response to my question about the a City Hall from Job Nelson, identifying himself as Lorie Zapf’s Chief of Staff. (None of her staffers names are yet up on the City Council Web Site for the District 6.) I must say that I am still not impressed that the council member’s staff took this long to respond (from December 27), did not issue a public statement (as far as I can tell) and is not actually responding to my inquiry “Please address the rumors published in the U-T that you might support building a new city hall without a vote of the people.” Read the response for yourself and decide.

The question of whether to put a new civic center on the ballot is beyond premature. We should not even be asking the question of council versus ballot for a new city hall, instead the Council and Mayor should be focusing on fixing our budget and pension problems. I heard loud and clear on the campaign trail that voters are distrustful of local government to spend their tax dollars wisely. Until we restore their basic confidence in local government- that we can fill their potholes, patrol their streets and keep their libraries open- we cannot even begin to think about building a new home for city workers. While the City is facing potentially significant costs to maintain city hall, we have higher priorities that we must focus on in the months to come. Until the city eliminates its structural deficit, resolves its pension problems and restores basic services the question about whether or not to place a new city hall on the ballot is a moot one.

So far, so good, as far is it goes, but there was wiggle room for a change in her position down the line, and nothing to preclude bypassing a vote of the people. Also, the discussion of how much it costs to run the old city hall has been part of Mayor Sanders standard line on the subject for some time. From yesterday’s U-T editorial pages, Q&A, Sanders responding:

Q: There’s been talk again about moving forward again on a new City Hall. What is your view of that?

A: I think we need a new City Hall. I think it saves us money every year, but I can’t educate the public. They’re not looking at it saving money. They’re looking at it as being some new monument. 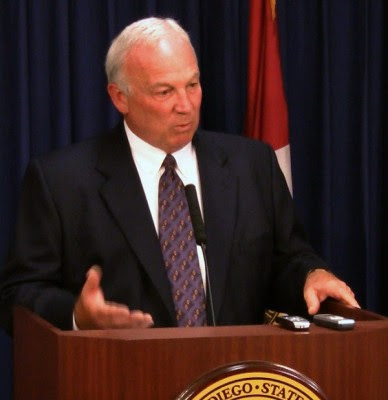 Of course that’s how we are looking at it, Your Honor, because the savings for such projects always seem to evaporate. As an experienced manager, I would like to see the “return on investment” with hard numbers. Here is what the mayor was summarized as saying last July (from KPBS):

He has argued that building a new City Hall will save San Diego money by avoiding significant maintenance expenses at the existing 1960s-era building, and because the city would not have to continue leasing office space for workers at locations around downtown.

My problem is that the gleaming structure pictured in the artist’s rendition looks much more expensive than necessary to achieve the savings desired. The failure to educate the public is the mayor’s own fault. Put out the numbers and let informed members of the public take a good look at them. Given the track record of our city government, just don’t ask us to take this on faith. 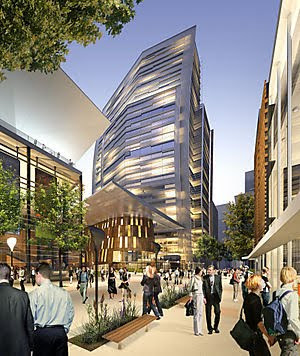