Revelations about the surveillance state are eroding trust in government and in law enforcement in particular.  Police officer involved deaths of civilians are also responsible. Setting the Ferguson incident aside, which details are murky; Eric Garner’s death in New York and the death of Tamir Rices in Cleveland, both captured on video, cast doubt on the fairness and integrity of those police departments and the justice system.

Locally, this distrust played out in social media on my app, NextDoor,which allows people to connect with others in their neighborhood (the comments referenced below come from the Bay Park neighborhood news feed.)  Significantly on this app, anonymity is not allowed, which seems to improve on-line behavior.  SDPD Officer Hesselgesser posted an article about car break-ins by thieves capturing the key-fob signal. I applaud the SDPD for taking to social media in this way to work with the community.  But, subsequent commentary revealed the impact of the lack of trust.  Officer Hesselgesser advised against covering up the vehicle’s VIN as a means of preventing thieves from getting fobs from the dealership. Some wondered why.

What’s the valid, non big brother reason we should keep the VIN uncovered?

…asked Tom from PB in the comments.

Another interaction that reveals the mounting concern over surveillance comes from this posting about video cameras at a Balboa Ave. intersection:

At the intersection of Balboa Ave. and the Target store entrance driveway, there are 4 video cameras installed next to the hanging traffic signals. All 4 cameras are aimed toward the center of the intersection. Does anyone know why the cameras are there, and who is monitoring them?

And comments worrying about transparency:

I noticed those also. For sure those are video cameras. They are *not* traffic light sensors or Traffic Signal Preemption (TSP) sensors for emergency vehicles (turn traffic lights green). The TSP sensors don’t look like cameras. That intersection is not on the 511 camera list: http://traffic.511sd.com/#cameras/search/layers=cameras
I’m guessing those cameras are for law enforcement against illegal use of Traffic Signal Preemption devices which are sold on the Internet. If you want to dig deeper, call councilmember Chris Cate’s office and ask.

In case you are curious the cameras appear to be optical detection cameras to sense approaching vehicles and linked to the traffic light controls. 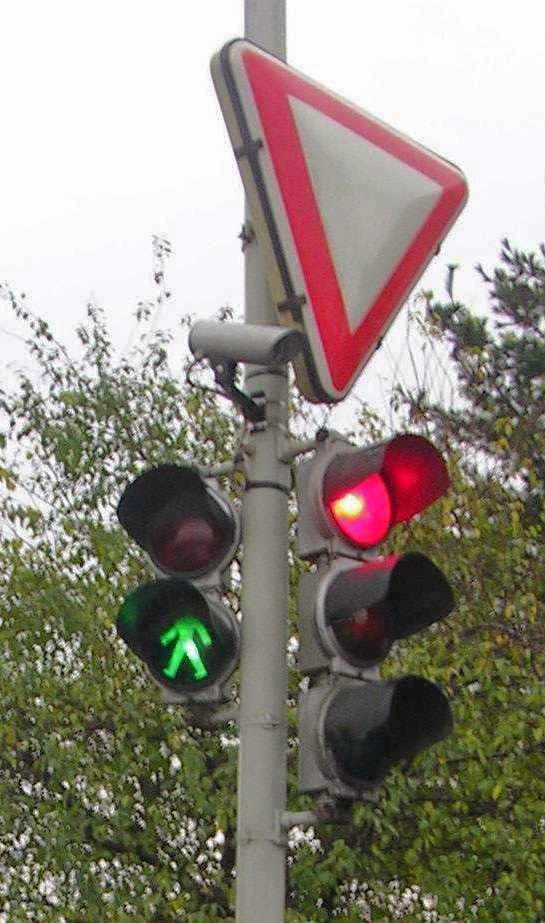 Finally, there is the unresolved issue of how the San Diego police are using the cell phone tracking devices known as the Stingray.  (This stingray is much more pleasant.) The Stingray is a mobile cell phone device that masquerades as a cell phone tower, allowing law enforcement to get a suspect’s (or average citizen’s) cell phone to divulge information to the interceptor.  Because information on the operation of the device is being kept secret by the San Diego police, we have no way of knowing if bystanders or even love interests of officers, are under surveillance.  The Snowden revelations have made us realize that once a technology is in the hands of the government, it will likely be misused without oversight.

Law enforcement needs to be held to a higher, not lower, standard than the average citizen.  There should be consequences when the police don’t live up to high standards, rather than the current culture that rallies the DA and fellow officers to get an exoneration.  Even when circumstances don’t warrant prosecution, poor police conduct that results in the citizen deaths should be punished by dismissal.  Finally, local law enforcement needs to be transparent.  The San Diego police should release as much information about the Stingray that pushes the envelope of what the Justice Department has told them.  When they engage on social media, a good thing, they need to follow up on citizen’s concerns.  Restoring trust that law enforcement is doing its job while protecting our constitutional rights will make us all safer.