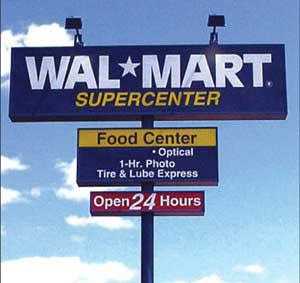 I was alerted by a tweet from my councilmember Lorie Zapf that Governor Jerry Brown has vetoed the anti-Walmart legislation sponsored by Juan Vargas, SB-469. Despite any rhetoric to the contrary, this bill was designed to make it harder for cities to approve Walmart supercenters that sell groceries, in direct competition with the largely unionized grocers like Ralphs, Vons and Albertsons. Labor’s support of the legislation is the key indicator that this bill was all about protecting union jobs from competition. From the U-T:

“We are disappointed but not surprised that we couldn’t defeat the millions spent by Walmart against this bill,” said Lorena Gonzalez, secretary-treasurer of the San Diego and Imperial Counties Labor Council. “We will continue to do more to work with small businesses and local decision makers to find a solution that protects local economies from supercenters.”

Protects local economies from supercenters? As long as the supercenters aren’t given sweetheart tax deals, like say, sports franchises, then they will generate sales tax and property tax for local government, while saving shoppers real dollars due to increased competition. With the NY Times reporting that household incomes are continuing to drop, despite the “end of the recession,” why wouldn’t we want to help those hardest hit by getting more competition in the grocery business.

As an additional item that I find offensive, we have Juan Vargas explicitly using state legislation to meddle in local affairs.

The measure was introduced statewide after the San Diego City Council rescinded its ordinance that would have required superstores to undergo an extensive economic impact analysis as part of the permit process.

Despite all the rhetoric about how this is about transparency, it was not. It is commonly understood that adding bureaucratic layers of review is the best way to kill a proposed business project. Walmart’s supercenters should enjoy equal protection under the law, and face the same scrutiny as any other land use proposal in any city. Is equal treatment for all businesses too much to ask?

Jerry Brown’s second governorship is proving interesting if nothing else. He has vetoed legislation to allow card check to ease union organizing of farm workers, as well as legislation limiting paid signature gathering for petitions. On the other hand he signed the California Dream act legislation giving in state tuition rates to illegal aliens. He is certainly proving hard to predict. Exit question: How would a Meg Whitman governorship been substantially different?

OK, one more question, what do #OWS types think? Do they believe in equal treatment for all businesses?