I live in the Bay Park area of San Diego as many of you know.  During the Council District 2 race, I became aware of a controversy regarding a change to height limits to buildings along Morena Blvd, which runs north-south in parallel with I-5 on the west side of Mission Bay.  Since both main candidates opposed the changes, I figured this was a dead on arrival proposal and didn’t think much more about it.  However, I continue to see homemade signs and professional yard signs in my neighborhood, which piqued my interest.  Here is the issue in a nutshell: In order to meet SB 375 targets to reduce per capita emissions from vehicles, the city planners are proposing to build high density, six story condominiums near the future trolley stations along Morena Blvd.  Screw that, to coin a phrase. As a current resident of the area, I am going to suffer massive traffic congestion to meet ephemeral emissions targets as no provision will be made for the influx of traffic.  No way will a majority of new residents be using the trolley to get to work downtown.  Hence the inevitable traffic mess.  Because the plan is intended to “reduce emissions,” there won’t be any more lanes on Morena Blvd, Clairemont Drive or Sea World Drive to handle all the extra traffic. (Have you tried to get on I-5 north from Sea World Drive during rush hour, even now?) 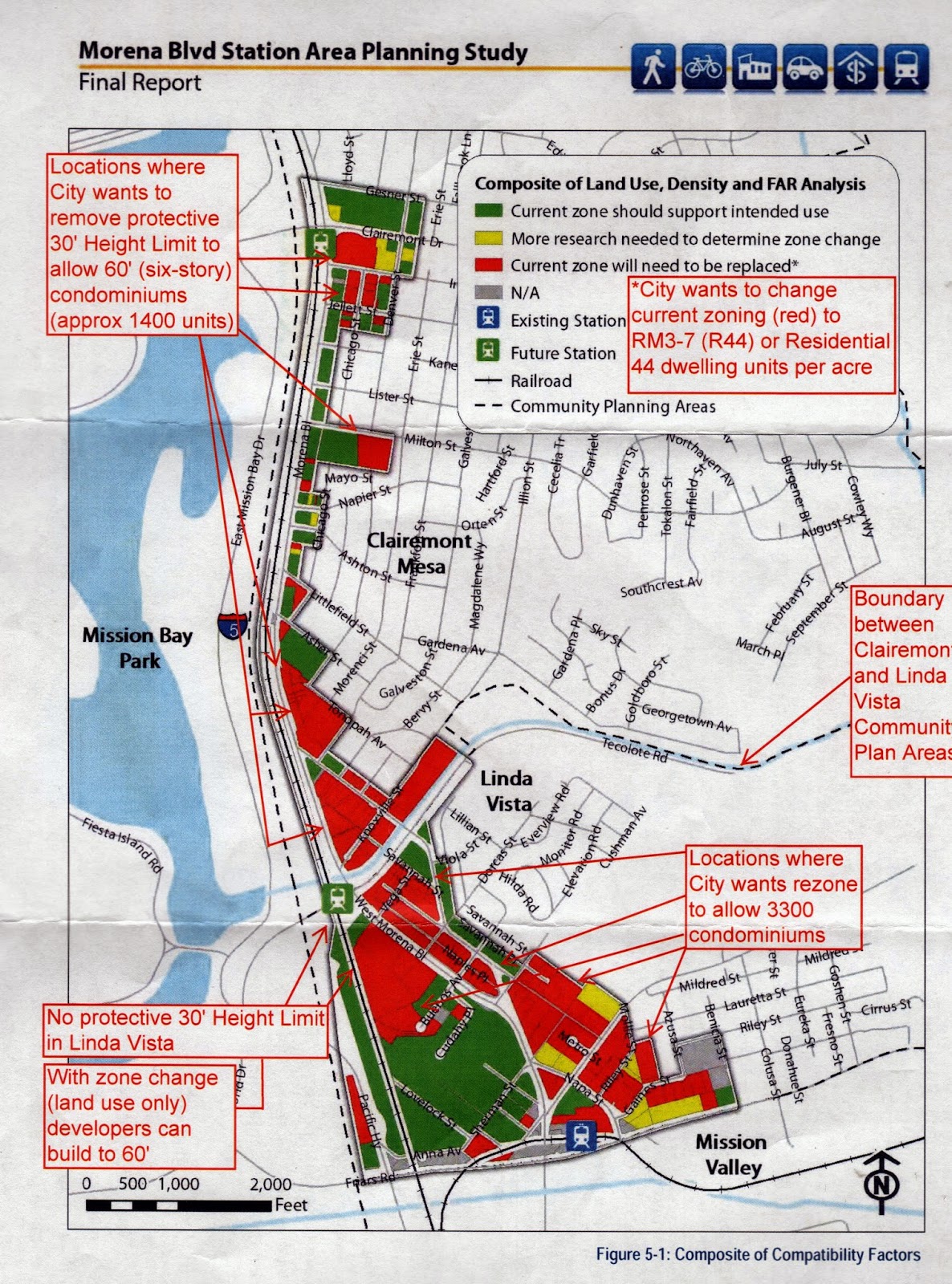 Annotated plan delivered to my doorstep by RaiseTheBalloon.com.  Click for larger image.

All the rezoning going on this city is designed for social engineering to get the subjects in line with the goals set by the state’s political elite.  If you want to reduce emissions, the better path is through a carbon tax that increases incentives to use fuel efficient vehicles without severely disrupting the economy or the value of our homes.  Of course, the left has never supported a carbon tax as a means to tackle pollution or climate change proving that their real goals are social engineering and socialism.

According to the CA Air Resource Board, San Diego region is required by SB 375, to cut per capita greenhouse gas emissions by 7% by 2020.  Somehow, building high rise condominiums close to new trolley lines is supposed to achieve that goal.  No mention of whether the fossil fuels consumed to build the trolley lines and the condos will count against the emissions cap.  Here is the Orwellian double-speak from the 2010 press release announcing the targets:

“These targets are ambitious, achievable and very good news for California communities.  Improved planning means cleaner air in our cities, less time stuck in your car, and healthier, more sustainable communities,” said ARB Chairman Mary D. Nichols. “Cities that choose to develop Sustainable Communities Plans that meet these targets have an advantage when it comes to attracting the kinds of vibrant, healthy development that people want.”

“Less time stuck in your car” translates we want to prevent you from driving by making driving living hell for you.  Thanks.  The folks at RaiseTheBalloon are a lot more polite in their criticism:

The pressure being exerted on our neighborhood to carry the 3 trolleys and the proposed development could lead to unsustainable urban compacting, displacement of our elderly and poorer residents, and put an unreasonable strain on our infrastructure while clogging our routes into and out of (ingress and egress) Bay Park, Bay Ho, and the Mission Bay areas.  We are encouraging the entire Clairemont Community to get involved and understand the issues.  Please see understandtheplan.info for more information.

If you troll through the planning document (Morena Blvd Station Area Planning Study), you will find that despite the planned increase to urban density, no changes to accommodate more traffic are contemplated (p. 121):

However, since there is considerable rush hour traffic out of Point Loma into this area, and no connection from Sea World Drive to West Morena, this does little to alleviate the foreseeable problems at the Morena/Tecolote intersection.  (Tecolote is an extension of Sea World Drive).

Please visit www.RaiseTheBalloon.comfor more information on how to end this social engineering.What You Should Be Reading