At least that’s my take on these comments, as quoted in the U-T article headlined “NOT ALL PROP. 30 TAX HIKE MONEY GOING TO SCHOOLS.”

Brown’s proposed $97.7 billion general fund budget assumes no state employee raises beyond those already required in union contracts. But contracts for all but two of the state’s 21 bargaining units are set to expire by July 2, and the Legislature now has a supermajority of labor-friendly Democrats.

At a news conference, Brown said he didn’t budget raises for fear that it could set an expectation for any specified amount.

“Collective bargaining means you got to meet in good faith, listen to the other side, and you go back and forth,” he said. “We have to enter those negotiations with an open mind, though we have to live within our means. So, I don’t want to put too many of my cards on the table.”

The Governor is signaling that he is ready to grant pay raises by these comments.  How could anyone with a shred of common sense think otherwise?  His comments about a specific amount remind me of an old and bad joke about an older profession than politician.  The only question we are debating now is how much; how much will the governor pay back the unions for their support of him.

Meanwhile all those commercials about strict accountability to ensure that Prop 30 cash went to the schools are swept into the dustbin  like so much election day confetti.

Towards the end of the article Brown equates government spending with investing and argues that government is how a free people act together.  He claims that he will spend the increased tax revenue wisely.  Unfortunately, the budgeting process in this state is largely illegitimate.  Big chunks go to education, but the state continues to rank low in educational attainment.  Further, huge amounts of education spending never makes it to the classroom, only 61% in fact.  Higher education spending has the effect of perpetuating a left wing ideology and to stifle dissent.  How is that legitimate?

The state has made the cities and counties its vassals, providing insufficient funding for required programs, loading another $5.3 billion on them, another source of illegitimacy.  Health and Human Services is the second highest category, behind K-12, yet California never participated in the welfare reform that the rest of the nation underwent in the Clinton years.  How is unreformed welfare spending legitimate?

Here is the actual budget summary, note all the hikes in spending (click to enlarge): 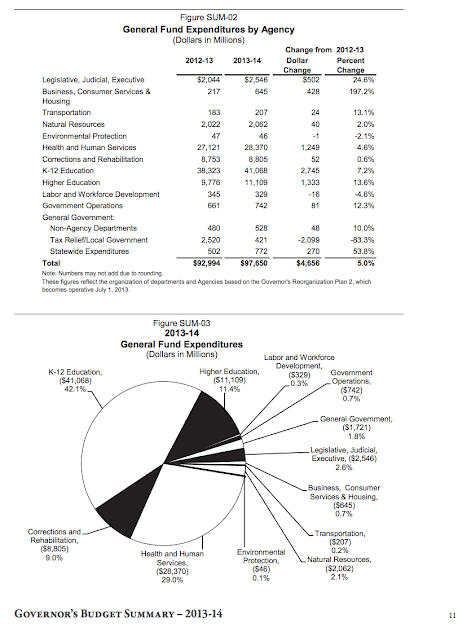