I attended the Anti-Tax Rally today in downtown San Diego held in front of the County Administration Building. Brian Bilbray was clearly the most famous speaker invited. He is in a competitive district, as I have previously discussed. The rally started with doctors in white lab coats speaking about the harm done to health care under the law. Doctor Gary Gonsalves led off the doctors’ segment. (It seems that Obama’s stunt at the White House has made it de rigueur to put the docs in lab coats.) 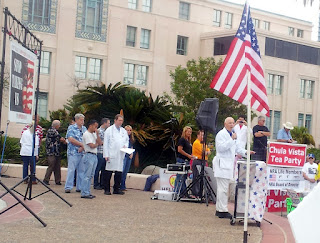 Among the issues raised by the doctors were the further insertion of bureaucracy between doctors and patients, the stripping of medicare, and the imposition of more regulations that will discourage doctor and exacerbate a doctor shortage. The last doctor to speak was Dr. Gina Loudon, who was the most exciting doctor speaker, befitting her role as radio personality. She pointed out that the GOP has not always been consistent in opposing an expansion of government which led her to work in the tea party movement, as opposed to mere Republicanism. (I agree.) 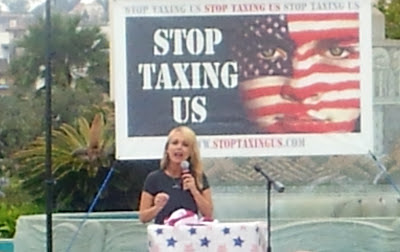 Many of the argument about health care proffered by speakers have been covered in some of my previous posts. But I also heard some new ideas for reforming health care and health insurance.

1) Let credit card companies manage Health Savings Accounts (that use pre-tax dollars) because they are good at detecting fraud. Further, allowing HSAs to roll from year to year would encourage people to shop around and reduce health costs. As a current user of a flexible spending account for some of my health care, I like this idea. But, the current system pushes me to spend all my eligible funds in one year, leading to some wasteful spending.

2) Get the states and the AMA out of nursing licensing. Doctors and hospitals are capable of judging the quality of nurses, this just restricts supply.

3) Get the AMA out of limiting doctor licensing and medical school accreditation, because they have a vested interest in decreasing the supply of doctors.

I was very interested to hear Brian Bilbray’s take on the law. He made great points. I know he has offended some purists who believe that nothing in the law should be retained because it is an affront to freedom. I agree, but politics is the art of the possible. Bilbray makes the very good point that right now, coverage for pre-existing conditions and children to age 26 are very popular parts of the legislation. But he made the point that those good ends could still be achieved without the monstrosity of so many new taxes and fees in the law. He hammered at the tax theme. He also pointed out that the law is a sop to to lawyers and insurance companies who wrote the law at the expense of the American people. His opponent, Scott Peters, is fully supportive of the law, so even if you challenge Bilbray for not being tough enough in standing against the law, his vote will be for repeal, but a Peters vote would not be. More prominent members of the tea party do not agree with my assessment of Bilbray, you can read the opinion here. 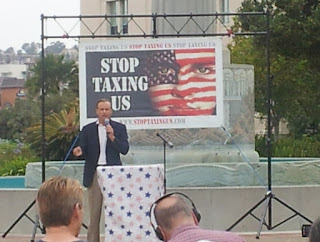 Nick Popaditch, was a much more dynamic and absolutist opponent of the bill. I cannot do justice to his speaking style. However, he made this great point. When the leftists like Obama and Pelosi argue their positions they attack their fellow Americans. In arguing that the reason for the mandate is because of “free riders,” they are attacking their fellow Americans who have exercised their God-given right not to purchase health insurance. The attacks on Americans exercising their rights is a hallmark of this administration, my opinion. (My answer for the free rider issue? Allow insurance to offer catastrophic coverage and allow hospitals to be aggressive in collecting from dead beats who can pay.) 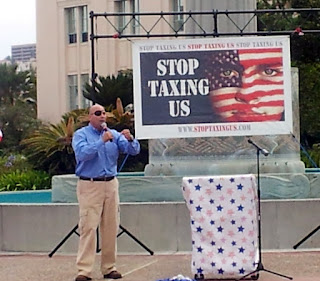 Nick Popaditch decries the attacks on Americans by supporters of the ACA.

A few other thoughts. Chief Justice Roberts came in for more than a little criticism. His logic that the law is a tax, does not square with the Congressional language. That is legislating from the bench, as some speakers pointed out. All in all, it was an inspiring rally that is one small piece of the larger movement to limit government.

Frequent commenter arhooley also attended; she had this to say.

I just got back from it, and although it was great, I’d like to see one change at these Tea Party rallies: a secular or agnostic Tea Party speaker. Maybe even an ex-liberal. There are plenty of us out here, and we don’t always feel we’re being addressed or included in speeches laden with calls to religion. An added bonus is that we’re not all preaching to the choir; we know how to talk to liberals about the supposed generosity of Obamacare and similar laws and movements.

I agree about not preaching to the choir, but have to say that many of the doctors couched their discussion in non-partisan, less political terms.